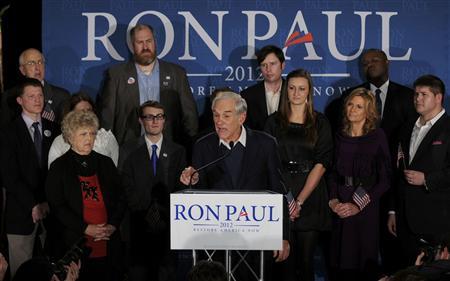 Outside of his campaign, few people think he is a threat to win the Republican nomination for president.

And yet, Texas Congressman Ron Paul has pulled in a big chunk of the votes in both states where Republicans have voted on potential nominees.

On Tuesday, Paul finished second in the New Hampshire primary with nearly one-quarter of the vote, a week after finishing third in the Iowa caucuses.

For Paul, 76, it was the latest example of how his anti-establishment campaign has made him a player in the Republican nomination process - and even a potential force as a third-party candidate.

Paul has been pilloried by rivals as being out of step with mainstream Republican views - a charge he doesn't seem to mind - but his appeal to a core group of young voters, retirees and others is becoming difficult to ignore.

At the very least, his continued success ensures he will continue to be a factor in the campaign as it heads south for primaries in South Carolina (January 21) and Florida (January 31).

Democrats FLOOD Fundraising For Pro-Trump GOP Candidates, It Is A TRAP And May Backfire