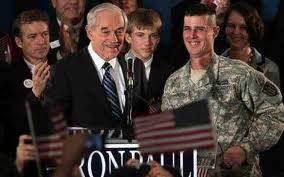 Support the troops – as long as they keep their mouths shut. That’s the operative principle as far as Jesse Thorsen is concerned. The Boston Globe reports:

“An Army reservist who took the stage at a political event for Ron Paul and expressed his support for the Republican presidential candidate could face legal troubles, the military said Thursday.

“Cpl. Jesse Thorsen, 28, stood at a podium at the Paul rally in Iowa on Tuesday night wearing his military fatigues and said meeting the Texas congressman was like ‘meeting a rock star.’

“’His foreign policy is by far, hands down better than any other candidate’s out there,’ Thorsen told the cheering crowd.

“Army Reserve spokeswoman Maj. Angel Wallace said participating in a partisan political event in uniform is a violation of Defense Department rules and the military is reviewing whether Thorsen could face legal ramifications. Soldiers are permitted to vote, participate in some political activities and express opinions about candidates as long as they are not in uniform and speaking in an official capacity, she said.”

Soldiers are allowed to “participate in some political activities” – as long as they are the right people participating in the right political activities. After all, in 1970 Al Gore campaigned in military uniform with his father, Albert Gore, Sr.; Richard Nixon campaigned in uniform, touting his status as “Lt. Commander Richard M. Nixon,” against Helen Gahagan Douglas; and, as a piece in Commonwealth magazine points out: