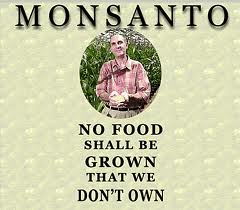 A report by Jeremy Scahill in The Nation (Blackwater’s Black Ops, 9/15/2010) revealed that the largest mercenary army in the world, Blackwater (now called Xe Services) clandestine intelligence services was sold to the multinational Monsanto. Blackwater was renamed in 2009 after becoming famous in the world with numerous reports of abuses in Iraq, including massacres of civilians. It remains the largest private contractor of the U.S. Department of State “security services,” that practices state terrorism by giving the government the opportunity to deny it.

Many military and former CIA officers work for Blackwater or related companies created to divert attention from their bad reputation and make more profit selling their nefarious services-ranging from information and intelligence to infiltration, political lobbying and paramilitary training – for other governments, banks and multinational corporations. According to Scahill, business with multinationals, like Monsanto, Chevron, and financial giants such as Barclays and Deutsche Bank, are channeled through two companies owned by Erik Prince, owner of Blackwater: Total Intelligence Solutions and Terrorism Research Center. These officers and directors share Blackwater.

One of them, Cofer Black, known for his brutality as one of the directors of the CIA, was the one who made contact with Monsanto in 2008 as director of Total Intelligence, entering into the contract with the company to spy on and infiltrate organizations of animal rights activists, anti-GM and other dirty activities of the biotech giant.

Contacted by Scahill, the Monsanto executive Kevin Wilson declined to comment, but later confirmed to The Nation that they had hired Total Intelligence in 2008 and 2009, according to Monsanto only to

keep track of “public disclosure” of its opponents. He also said that Total Intelligence was a “totally separate entity from Blackwater.”