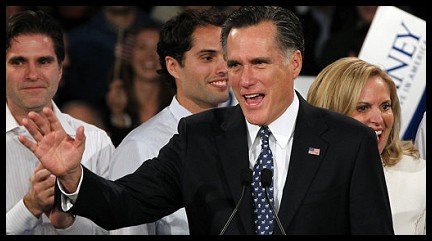 Simultaneously, at the stroke of 8pm ET, all of the major TV news networks and news agencies declared Mitt Romney the winner of the all-important "First-in-the-Nation" GOP New Hampshire primary.

It's so important, in fact, that the "winner" was declared before any of the optically-scanned paper ballots --- 90% of votes in the state are tallied by easily-hacked Diebold voting systems, which sometimes simply just drop votes, as programmed by a company with a criminal background --- were examined by any human being to make certain the results actually reflected the voters' intent. (In NH in 2008, they often did not.) The vast majority of them hadn't even been tallied at all yet by one of those secret vote counting computers, as the news outlets declared their winner of the NH GOP primary based on Exit Poll results.

You remember Exit Polls, right? They're the things that, as we were told over and again back in 2004, are neither accurate nor reliable for use in selecting the winner of elections. In NH in 2008, we were told they were wrong as well.

Nevertheless, with 51% of precincts reporting (and, again, none of the paper ballots from any of the Diebold-tallied towns actually examined to make certain the computers tallied them correctly), the media-reported results declare Ron Paul coming in second, followed by Jon Huntsman, Newt Gingrich, Rick Santorum, Rick Perry and then Buddy Roemer.

One positive note: There was a dearth of problem reports, at least that I was able to find, coming from the polls today --- where voters enjoyed the freedom to both register and vote on the very same day, and no voter was denied their right to cast their legal vote due to a lack of Photo ID in the "Live Free or Die" state.

And one cautionary note: As usual, our standard reminder that concerns about tallies and related problems do not often come to light until days, weeks (and sometimes even months) after Election Day. But for now, if you trust the results of your elections to Exit Polls, Diebold voting systems and LHS --- the private, unaccountable company whose Vice President Ken Hajjar, a convicted drug trafficker, was barred from working on elections in the State of Connecticut after leaving profane remarks here in comments at The BRAD BLOG in 2007 --- which programs them, well, there you have it.

Caught! Biden's scheme to take over 2022 elections now in bull's-eye

The Media CANT STOP Her!

MUST HAPPEN: Trump Promises to Gut and Fire "Tens of Thousands of Civil Servants"...

'It's the murder of our country!' Mike Lindell says 'billion' will watch his ele