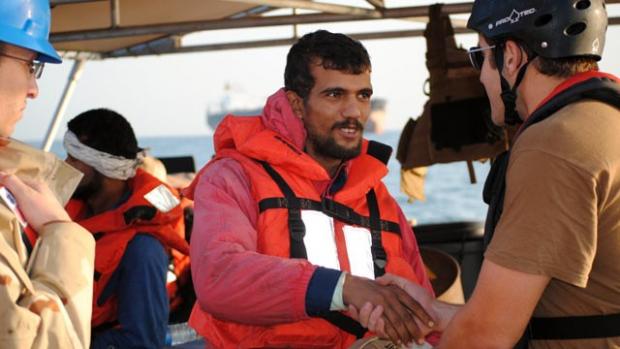 For the second time in as many weeks, the U.S. military has rescued distressed Iranian sailors, despite the extremely high tensions between the two nations.

According to the Navy's account, at about 3 a.m. local time an American Coast Guard patrol boat in the north Persian Gulf was hailed by flares and flashlights from an Iranian cargo ship whose engine room was flooding. Six Iranians were rescued from the ship, fed halal meals in accordance with Islamic law, and later taken to shore.

"Saving lives is the last thing you expect to do at [3 a.m.] while patrolling in the Northern Arabian Gulf, but being in the Coast Guard, that's what we are trained to do," Boatswain Mate 2nd Class Emily Poole said in a statement by the Navy, using an alternate designation for the Persian Gulf.

Last week, the U.S. Navy rescued more than a dozen Iranian sailors who had been held hostage by pirates in the Arabian Sea for weeks. American sailors on a "visit, board, search and seizure team" were able to free the sailors and take 15 suspected pirates into custody without incident on Jan. 5, the Navy said. The pirates had been apparently using the Iranian vessel as a "mothership" to launch pirate operations in the region.