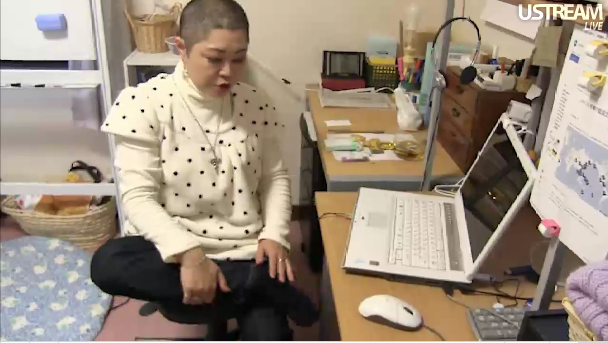 Following up this article about Fukushima women losing their hair…

Independent journalist Iwakami Yasumi had an interview with her.
(Note, the original movie was missing on ustream so changed the embed code on 23:00 1/10/2012)

Q, Do you believe the government ?

A, No,I don’t even doubt. I know they tell just lies.

Q, Why do you stay in Minamisoma ?

A, To prove government is killing us by using my own body. On 3/14, I thought that was already too late to evacuate, taking it into consideration that the reactors had already exploded and Tepco had released tons of radionuclides by venting. My place is not in the evacuating zone. Government still keeps telling us it’s not dangerous, so I wanted to prove how a human becomes if they live as the government tells us to do. Everyone dies. I thought this would be my best way to burn the rest of my life. This is why I recorded details of my health problem, but honestly it was faster than I thought.

Q, How did the symptom go ?

A, From June to August, had diarrhea like water. At first I though I had something bad. I finally associated it with radiation on 8/13. My fingers ( except for the thumb and pointing finger) got numb. More and more area started feeling numb. It hurt too. Even the doctor couldn’t tell why. My arms and neck didn’t have numb. When one month and half have passed since the beginning, numb feeling disappeared. Doctor told me, the symptom might be on and off. From 8/18, my jaw started having terrible pain. Doctor couldn’t tell why either. got prescribed for pain killer and suppository but worked only for 3 hours.got a result of blood test on 8/25. The inflammation reaction turned out to have become worse but don’t know where the inflammation was.

All the fingers started feeling numb. In October, felt like something was stuck between the teeth, and 3 teeth fell off. got the doctor prescribe pain killer again. After all, 4 teeth fell off. had remaining teeth pulled off too because they hurt too much. lost 8 teeth in total. Dentist told me not to come anymore because he doesn’t want to pull it anymore.

My hands got bladder on 10/20. not itchy or painful. It grew every 10 minutes. Yellow water is inside. There was nothing wrong at night  but it appeared in the morning. spread inunction on hands. 30 minutes later, my legs got bladder too. Doctors couldn’t tell why either.

11/9, extreme fatigue. couldn’t even open the eyes. started losing hair from November. Niece told me I was balding.