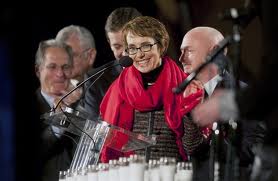 WASHINGTON, D.C. (CBS Washington/AP) – A man whose wife died in the deadly Tucson shooting one year ago says Rep. Gabrielle Giffords and her husband makes him want to “vomit.”

Speaking to the Arizona Republic, 77-year-old George Morris, a survivor of the shooting, blames Mark Kelly for the death of his wife and five others for not taking extra precautions to protect Giffords after she had been receiving death threats.

“I’d like to debate our dear captain astronaut (and ask) why he didn’t have security,” Morris told the Republic. “My wife would still be alive.”

Morris vented to the paper that he is tired of seeing media coverage of Giffords and her husband.

“Every time I see them on TV, it makes me want to vomit,” he told the paper.

Morris, who refused an invitation to have President Obama visit him in the hospital after the shooting, believes that Giffords should be “thrown out of Congress posthaste.