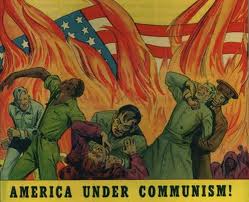 America has come back, at least politically, to where it was in the far-off 1950’s when Communist-scares and the American fascism of Wisconsin Senator Joe McCarthy kept the republic in a state of anxiety and deep fear.

"Reds under our beds" was the slogan in those days of paranoia and witch-hunting. Today, the new scare mantra is: "Muslims under our mattresses," and "Iran threatens the world."

In the McCarthy era, the Republican Party was run by East Coast moderate conservatives from New York, Boston and Washington who were well educated and worldly. McCarthy was a GOP black sheep from the political badlands of the deep Midwest.

The Soviets and their fellow travellers were a real danger in that era, but not to the absurd degree of McCarthy’s fevered claims. But for a while, his anti-Communist campaign intimidated America and held it in thrall. Being accused of pro-Communism was then as ruinous a charge as being called "pro-terrorist" today.

The Republican elite eventually became sickened by McCarthy’s lies and alarms that the government was filled with Communists and Soviet spies, and worried that they were fast losing control of the party to the populist McCarthy. Sixty years later, the GOP indeed fell under control of the rural heartland.

In recent months, we have witnessed the rebirth of McCarthyism in the Iowa presidential caucusas five Republican candidates struggled to outdo one another in warning of the perils of Iran and Islam – the new Red Menace.

The only Republican candidates who spoke responsibly about US foreign policy were Congressman Ron Paul and former Ambassador Jon Huntsman.

The other Republicans issued blood-curdling threats against Iran, and salaamed Israel without relent, and called for continued US domination of the globe.