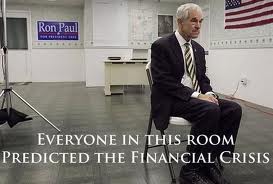 RedState tweets: “Why is Ron Paul allowed to Continue Participating in Debates?”

In other words, we need that debate stage to be full of people who are three millimeters away from each other ideologically. That’s all the choice you get, citizen!

So here’s what RedState is saying:

Why would we want on the debate stage someone who, when all other candidates were clueless, predicted the recent economic collapse to a T? (He noted on the House floor in 2001 that the recently burst dot-com bubble, itself a creation of the Fed, was giving way to a housing bubble, also created by the Fed, which would just as surely burst.)

Why would we want someone with $1 trillion in specific cuts? We’ve had so much success with candidates who speak only generically about cutting spending while on the campaign trail!

Why would we want someone who’s never voted to raise taxes? We’ve had so much success with people who raised taxes and then, conveniently, happened to “regret” that decision right around the time they decided to run for higher office.

Why would we want someone who will abolish the Department of Education? We’ve had so much success with “compassionate conservatives” who increase spending on it.

Why would we want someone who criticizes the Federal Reserve for bringing about the business cycle? So what that the great economists conservatives are supposed to admire – e.g., Ludwig von Mises and F.A. Hayek – thought the same thing! Who cares? Who’s even heard of those guys? Dick Morris is the only economist we at RedState need, baby!

1 Comments in Response to RedState: Get Ron Paul Off the Stage

:-D  ahhhh, cuz he is well funded, in second place and pissing you off.

Shouldn't the question be why is Rick Perry still in the debates...or is he the next miraculous dead man scheduled to rise before the S. Carolina debates?