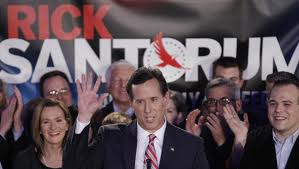 In the tiny town of Riva del Garda in northern Italy, 83-year-old-Maria Malacarne Santorum keeps her family’s secrets—including those of her late husband’s cousin, Rick. In an exclusive interview with the Italian weekly magazine Oggi, Mrs. Santorum recalls fondly when Rick visited her in 1985 during his law internship in Florence, and when he came back again in 1986 and 1989. “He loved our culture and cuisine so much, he brought his wife-to-be, Karen, a massive cookbook of Italian recipes,” she said.

But the elder Santorum matriarch doesn’t understand why he has diverged so far from the family’s longtime political stance. “In Riva del Garda his grandfather Pietro and uncles were ‘red communists’ to the core,” writes Oggi journalist Giuseppe Fumagalli, likening the family to “Peppone” after a famous fictional Italian communist mayor who fought against an ultraconservative priest known as Don Cammillo and about which a popular television series is based. “But on the other side of the ocean, it’s like his family here doesn’t exist. Instead he draws crowds as the head of the ultraconservative faction of the Republican party, against divorce, gay marriage, abortion, and immigration.”

Those politics don’t play well in Riva del Garda, a community of ultraliberals. On the campaign trail, Santorum often touts his grandfather’s flight from Italy “to escape fascism,” but he has neglected to publicly mention their close ties with the Italian Communist Party. “Rick’s grandfather Pietro was a liberal man and he understood right away what was happening in Italy,” Mrs. Santorum told Oggi. “He was anti-fascist to the extreme, and the political climate in 1925 was stifling so he left for America. After a few years he returned to Italy with his wife and children, including Aldo, Rick’s father, who passed away late last year. It’s a shame he won’t have the joy to see his son’s success in his bid for the White House.” She goes on to explain how the family then became pillars of the Communist Party in Italy.