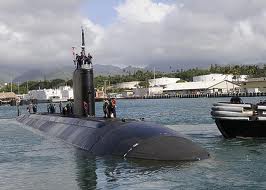 The Navy’s top officer detailed Tuesday the strategy for making sure the South China Sea and Western Pacific remain open to international shipping, saying an emerging China might try to “limit access in the region.”

The remarks by Adm. Jonathan Greenert, chief of naval operations, represented a frank assessment of China’s potential power grabs as it continues a military buildup that includes more ships and anti-ship weapons.

Adm. Greenert spoke a week after President Obama presented his military strategy, which states that the armed forces will put renewed focus on Asia and the Middle East. The Obama strategy mentions China as a “regional power” that can affect U.S. security “in a variety of ways.”

Appearing at the Center for a New American Security think tank, Adm. Greenert was more specific.

“Over the long term, China will have the greatest potential, I view, to affect the economic and the security dynamics throughout the region and perhaps the world,” he said. “Their economic strength has grown. They have great regional capability and capacity, and it’s growing.

Chinese Ambassador Called To White House After Overnight Sanctions: "We Do Not Want A Crisis

The Pentagon Is Behind Pelosi's Trip