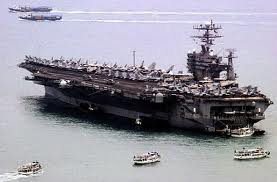 (Reuters) - The U.S. military said on Wednesday that a new aircraft carrier strike group had arrived in the Arabian Sea and that another was on its way to the region, but denied any link to recent tensions with Iran and portrayed the movements as routine.

The shift in the powerful U.S. naval assets comes at a moment of heightened tensions with Iran, which has threatened to close the Strait of Hormuz - the world's most important oil shipping lane - if U.S. and EU sanctions over its nuclear program cut off its oil exports.

The U.S. military has said it will halt any blockade of the strategic strait and the top U.S. naval officer acknowledged on Tuesday that preparing for a potential conflict there was something that "keeps me awake at night."

Still, the Pentagon denied any direct link between recent tensions and the movement of aircraft carriers.