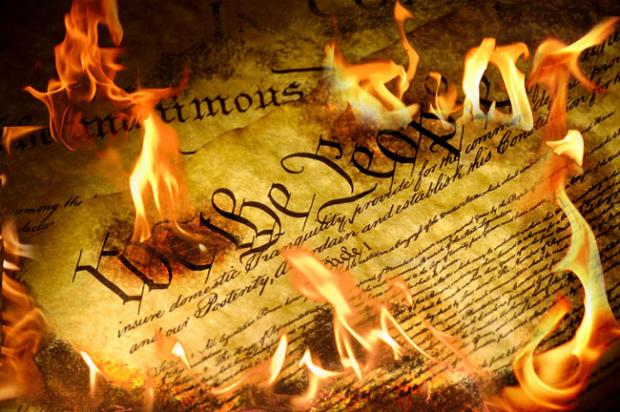 Pay close attention. This is how it happens…

President Obama found a moment of reduced visibility, in an unwatched hour on New Year’s Eve, to sign the latest assault on the Fifth Amendment. In signing the National Defense Authorization Act of 2012 on New Year’s Eve, Obama knew the nation’s attention would be elsewhere, diverted by revelry, football, New Year’s Day, and a Monday national holiday.

In case you haven't heard, the National Defense Authorization Act allows the government to detain people indefinitely – yes, it includes American citizens who can be taken even on our native soil and imprisoned – merely on the basis of accusations.

The measure is "so radical," says Human Rights Watch, "that it would have been considered crazy had it been pushed by the Bush administration." And although Obama appended a signing statement as he put his name to the act, solemnly assuring the nation that the power he insisted on having won’t be used recklessly, it is a political gesture that has no more force of a law than attaching a little yellow sticky note to the bill. If the clear language of the Constitution itself cannot bind the governing classes, it is hard to imagine a post-it note having much effect on the current or future presidents now that the indefinite detention of Americans without trial has been legislatively countenanced.

There you have it in a nutshell, the new American way: Guilty until proven innocent.

This is how once-free people slip into state tyranny and slide into martial law...........

3 Comments in Response to Slip-Sliding into Tyranny! It's the new American Way

Good article. And, for those "true believers", who missed the memo:  It's true!

It's a personal bias, but i could have done without the reference to the imagininative ramblings of Dante.

It wouldn't make anything better, but I miss the "good ol' days", when politicians at least kissed you.

Hitler was put into power by the big banking community. He was to be their puppet. He backfired on them, and almost destroyed them.

Hitler was BAD. But after he took off on his own without the blessing of the banks, that's when he became a straight-forward, do-it-by-force kind of guy.

If Hitler had won WWII, he would have just barely won. He would have been overthrown by the patriots of the world, anyway, and probably within the first year of his world reign. But if he had won, he just might have destroyed the World Banking System, the thing that was so clever that it placed him into power in Austria, without force, before he backfired on them.

Now we have the World Banking System doing the same thing all over again. They have learned from their Hitler-mistakes, and are rolling onward in their world-conquering operations like a Panzer tank. One of their largest bastions of slavery in the world is the Federal Reserve Bank.

No more freedom of speech.