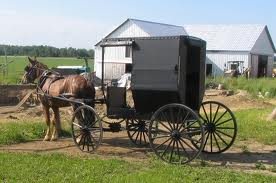 MAYFIELD, Ky. - A group of Amish men were sent to jail in western Kentucky Thursday for refusing to pay fines for breaking a state highway law that requires their horse-drawn buggies to be marked with orange reflective triangles.

The men have a religious objection to the bright orange signs, which they say are flashy and conflict with their pledge to live low-key and religious lives.

Ananias Byler, the first of 10 Amish men due in Graves County District Court on Thursday, was sentenced to 10 days in jail. The men were jailed for being found in contempt of court for refusing to pay the fines. Byler told Judge Deborah Crooks Thursday that he would not pay the $489 he owes.

"I totally understand your objection," the judge told Byler. "But you're in violation, and it's not up to me to change the law. It doesn't really matter what I think about any of this."

The men belong to a conservative breakaway group of Amish known as Swartzentruber. They live simply, with no electricity, plumbing or appliances. But in recent years they have been running afoul of the law for refusing to use the triangles on their buggies, and some were sent to jail last year.

What law? They must be talking about the Department of Motor Vehicle's administrative rule, codified in the state statutes. What is the specific statute? I am willing to bet that I can prove it does not apply to these people. If they do not have a "motor vehicle" then how on earth can the government department responsible for regulating motor vehicles apply their rules?

The real tyranny here, is that the judge is putting these men in "debtor's prison", which is against the law - thereby making the judge the real criminal!

This is like the game police play. They "detain" you, and you exercise your right to remain silent, so they then "arrest" you for "obstruction". Word games designed to oppress and injure the American People. The only "legal" remedy the state has for someone not paying a "traffic fine" is to revoke their license. Jail in not an option. Jail is not legal for failure to pay a fine. This is tyranny. These Amish folk have beaten the state at their own game, so the state resorts to naked violence and oppression.

Only 10 days in jail? These criminals should have gotten 10 years. On the road with out a reflective triangle & disobeying a court order? ? What is this world coming to?

How much more are the people of this country going to put up with this insanity run by a police state? These black robed devils are just as much out of control as the brainless drones with guns and badges.

Think about how many lives, families, children, mothers and fathers these bastards in black robes have destroyed throughout their sick and twisted careers for the sake of more power and money. It is absolutely unbelievable and yet it's still business as usual. I will bet anything that there is not ONE black robed devil that retires in this country without at least a million dollar bank account.

Here is a message for all of you sick bastards hiding behind respectability and the color of law.

The universal laws work with mathematical precision without fail for everyone including YOU. Your day will come to answer the call.

“When armed force compels compliance with mythical laws and money is demanded for its violation, power will corrupt and greed will never be satisfied.”
Richard L Koenig