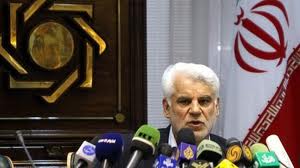 WASHINGTON — The latest round of American sanctions are aimed at shutting down Iran’s central bank, a senior U.S. official said Thursday, spelling out that intention directly for the first time.

“We do need to close down the Central Bank of Iran (CBI),” the official told reporters on condition of anonymity, while adding that the United States is moving quickly to implement the sanctions, signed into law last month.

The sanctions, broadly aimed at forcing Tehran to shift course on its nuclear program, targeted Iran’s crucial oil sector and required foreign firms to make a choice between doing business with Iran or the United States.

Foreign central banks that deal with the Iranian central bank on oil transactions could also face similar restrictions under the new law, which has sparked fears of damage to U.S. ties with nations like Russia and China.

As Iran ramps up its nuclear program, a look at every movement of the Doomsday Clock

“If a correspondent bank of a U.S. bank wants to do business with us and they’re doing business with CBI or other designated Iranian banks… then they’re going to get in trouble with us,” the US official said.

The measures were contained in a mammoth $662-billion defence bill, which President Barak Obama signed on December 31 at a time of rising tension with Tehran, which has threatened to block the Strait of Hormuz — through which more than a third of the world’s tanker-borne oil passes.

The United States has warned it will “not tolerate” such an interruption.

A satellite image shows the suspected Iranian nuclear facility of Fordo near the holy Shiite city of Qom, where Iran is has begun enriching uranium to 20 per cent, according to the UN atomic watchdog agency IAEA