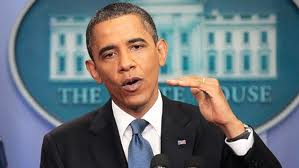 Congress will have had 15 days to say no before the nation’s debt ceiling automatically is raised from $15.2 trillion to $16.4 trillion.

In a letter to House Speaker John A. Boehner (R-Ohio), Obama wrote that ”further borrowing is required to meet existing commitments.”

Obama had sought to make the request at the end of last month, when the Treasury came within $100 billion of its borrowing limit. However, with Congress on recess, lawmakers from both parties asked the president to hold off. The House is out of session until Jan. 17, and the Senate until Jan. 23.

Since then Treasury officials have used special revenue and accounting measures to maintain the nation’s solvency. Yet the White House cast the delay as a technicality, saying there is no chance the limit will not be increased, even if Republican lawmakers attempt to object.

Under an agreement reached in August, Congress and the White House moved to raise the debt limit in three increments while also implementing $2.4 trillion in budget cuts. The deal, however, also gave Congress the option of voting to block each of the debt-ceiling increases by passing a “resolution of disapproval.”

And the usless putrid cowards in Congress will give it to him.

Janet Yellen warns of a possible October default on U.S. debt, swollen by the pandemic.