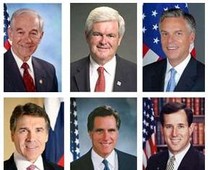 This Saturday, January 14, 2012, Fox “news” will air a prerecorded forum/debate moderated by former Governor Mike Huckabee who has his own show on Fox “News” called “Huckabee”. Congressman Tim Scott (R-SC) will join Huckabee and will also offer questions.

The forum/debate will be held at the Sottile Theatre, 44 George Street at the College of Charleston, and will start at 12:00pm ET, Saturday, January 14. 2012, but it will not be aired live. It will air on the Fox “News” channel that night at 8:00pm ET prerecorded, in order to edit the forum/debate where needed.

Doors will open at 10:30 am, with seating on a first-come, first-served basis.

Two of the candidates in the forum/debate, Rick Santorum and Newt Gingrich, were former Fox “News” employees as opinion contributors on various Fox “News” shows. Both were required to resign in order to run for president.

If the candidates and potentials do not talk about this ONE topic, they are out to steal from and hurt the people. It is the topic of income taxes.

In the Constitution, there are really only two forms of tax laid down that they, the Federal Government can tax with. And the 16th Amendment didn't change any of it. These two forms are:

1. Import/Export taxes - taxes on products moving into and out of the country;
2. Interstate Commerce taxes.

This is all that the Federal Government needs to supply all of its required operations. Anything above this is simply harming the people, both in the States, and around the world.

If the candidates don't talk about this - how to get us out of income taxes and back onto Constitutional taxes - then they are simply a bunch of thieves, thinking of all kinds of ways to cover up their thievery.

Ron Paul is starting in this direction when he talks about monitoring and auditing the Federal Reserve Bank - and possibly even eliminating it. Why? Because it is the Fed that ultimately really receives the income tax money, not the government.