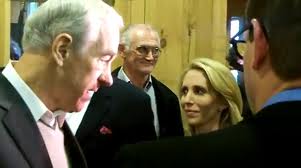 In the video below, CNN’s Dana Bash is repeatedly criticized for her unfair coverage of Ron Paul.

On January 2, the corporate media correspondent said she was worried about the possibility of Paul doing well in the New Hampshire primary.
Paul came in second behind Mitt Romney on January 10.
Near the end of the video, Bash says she has received a lot of negative email about her biased interview on January 9 that was cut short by Jesse Benton, Paul’s campaign spokesman.
Oddly, she compares the criticism of her coverage to the Arab-Israeli conflict and says there is nobody in the media as fair as she is.
Bash apologists at TVNewser insists the comment made to her husband and CNN anchor John King was merely a “misplaced phrase.”
On January 10, Revolution PAC said Bash’s comments represent “strong personal bias.” Said Revolution PAC Chair Gary Franchi in a press release: “It is clear, when the Paul Camp has to end interviews early with her, that Dana Bash is tainting coverage of this election and deserves a reassignment.”