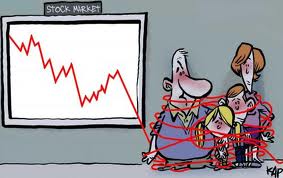 • US markets finished higher this week despite downgrade rumors and an uncharacteristic profit miss by JPM. The S&P ended the week 0.9% higher, 0.5% for the DOW, while the NASDAQ posted a 1.4% gain. Canada’s TSX also snapped gains this week as their benchmark fell around 40 points Friday. They did manage to eke out a 0.35% gain though.

• Good news for the bulls, US consumer sentiment is currently at a new high. But will they act on it?

• European indices ended pretty mixed ahead of the downgrades. While the DAX closed 0.44% higher, the FTSE and CAC both fell by 0.15%.

• 1-year Greek bonds are now yielding 400%! No, that wasn't a typo and yes, that’s in actual percentage, not BPS. What do you think monkeys? Buy? Sell? Or hold? Heh. On a lighter note, after a very successful offering, Italian and Spanish bond yields have finally fallen.

• The S&P downgraded 9 EU countries. Italy, Spain, Portugal and Cyprus were cut down by two notches, while France, Austria, Malta, Slovakia and Slovenia were cut down by one. This effectively strips France and Austria of their AAA ratings and knocks down the EFSF guarantors from 6 to 4. A negative outlook was also placed on AAA Finland, the Netherlands, and Luxembourg, 3 of the EFSF’s remaining 4 guarantors. Think it can keep its AAA rating?