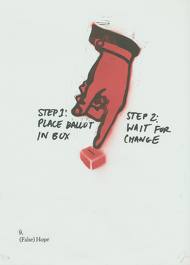 Beware of bubbles of false hope.  Right now there is a lot of talk about how the U.S. economy is improving, but it is all a lie.  The mainstream media can be very seductive.  When you sit down to watch television your brain tends to go into a very relaxed mode.  In such a state, it becomes easy to slip thoughts and ideas past your defenses.  Sometimes when I am watching television I realize what the media is trying to do and yet I can still feel it happening to me.  In this day and age, it is absolutely critical that we all think for ourselves.  When you look at the long-term trends and the long-term numbers, a much different picture of the U.S economy emerges than the one that is painted for us on television.  Over the long-term, the number of good jobs in America has been steadily going down.  Over the long-term, the number of Americans living in poverty and living on food stamps has been steadily going up.  Over the past couple of decades, tens of thousands of businesses, millions of jobs and trillions of dollars of our national wealth have gone out of the country.  Our debt is nearly 15 times larger than it was 30 years ago, and U.S. consumer debt has soared by 1700% over the past 40 years.  Year after year the rate of inflation goes up faster than our incomes do, and this is absolutely devastating the middle class.  Anyone who believes that we can keep doing the same things that we have been doing and yet America will still have a bright economic future is delusional.  Until the long-term trends which are taking the U.S. economy straight into the toilet are reversed, any talk of a bright economic future is absolute nonsense.
In America today, we have such a short-term focus.  We are all so caught up with what is happening right now.  Our attention spans seem to get shorter every single year.  At this point it would not be hard to argue that kittens have longer attention spans than most of us do.  (If you have ever owned a kitten you know how short their attention spans can be.)  Things have gotten so bad that most of our high school students cannot even answer the most basic questions about our history.  If people are not talking about it on Facebook or Twitter it is almost as if it does not even matter.

But any serious student of history knows that is is absolutely crucial to examine long-term trends.  And when you look at the long-term trends, it rapidly becomes apparent that the U.S. economy is in the midst of a nightmarish long-term decline.

The following are 24 statistics to show to anyone who believes that America has a bright economic future....

#1 Inflation is a silent tax that steals wealth from all of us.  We continue to shell out increasing amounts of money for the basic things that we need, and yet our incomes are not keeping pace.  Just check out the following example.  Gasoline prices have been trending higher for several years in a row as one blogger recently noted....

#2 If you can believe it, the average American household spent approximately $4,155 on gasoline during 2011.

#3 Electricity bills in the United States have risen faster than the overall rate of inflation for five years in a row.

#4 Health care costs continue to rise at a very alarming pace.  According to the Bureau of Economic Analysis, health care costs accounted for just 9.5% of all personal consumption back in 1980.  Today they account for approximately 16.3%.

#5 Getting a college education has also become insanely expensive in America.  After adjusting for inflation, U.S. college students are borrowing about twice as much money as they did a decade ago.