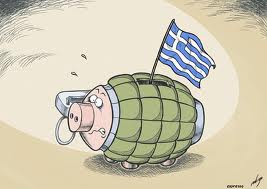 This one's headed toward the ground in a power-dive....

Greece’s creditor banks broke off talks after failing to agree with the government about how much money investors will lose by swapping their bonds, increasing the risk of the euro-area’s first sovereign default.

Proposals by a committee representing financial firms haven’t produced a “constructive consolidated response by all parties,” the Washington-based Institute of International Finance said in a statement yesterday. Talks with Greece and the official sector are “paused for reflection on the benefits of a voluntary approach,” the group said.

Aha.  The Greeks have figured out that when you owe someone money and borrowed it unsecured, as is always true for sovereigns, you have the trump hand.  The only real "price" to be paid by telling your creditors to***** off is that you won't be able to borrow again in the future.

This is a material price, but it is not the end of the world.  It means you have to balance your budget immediately, but that's good -- not bad.

Of course everyone is freaking out about triggering Credit Default Swaps and similar instruments.  That's misplaced -- there simply isn't that much outstanding for Greece in that regard.

No, the real contagion risk is not Greece.  It is that once Greece does this, and the world does not immediately end, then other nations (hint: Italy?) may come to the conclusion that they too should tell creditors to stick it where the sun does not shine.