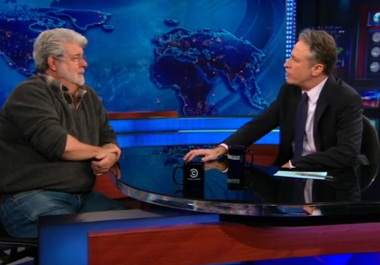 Watch the trailer for George Lucas’ latest film, Red Tails, and you will be captivated! Visually arresting, dramatically compelling, true to history– this action film will be a real treat for movie goers when it debuts this Friday, January 20th. George Lucas, who is famous for bringing the world one of Hollywood’s most epic and timeless offerings, the Star Wars saga, quips that with all of the action-packed, dog-fighting scenes in it, Red Tails will be the closest movie goers will ever get to viewing Episode 7 (of the Star Wars franchise)! That’s all this Star Wars fan needs to hear to purchase tickets.

In the description on the YouTube page for one of the film’s trailers, Red Tails‘ creators summarize it thusly:

“1944. As the war in Europe continues to take its toll on Allied forces, the Pentagon brass has no recourse but to consider unorthodox options — including the untried and untested African-American pilots of the experimental Tuskegee training program. Just as the young Tuskegee men are on the brink of being shut down and shipped back home, they are given the ultimate chance to show their courage. Against all the odds, with something to prove and everything to lose, these intrepid young airmen take to the skies to fight for their country — and the fate of the free world.”

But apparently Hollywood isn’t so sure that an awesome new historical action film by the creator of Star Wars himself will be a success.  Their reason? The film features an essentially all-black cast. In an interview with The Daily Show‘s Jon Stewart, George Lucas told him that shockingly, he had trouble getting funding for the film “because it’s an all-black movie. There’s no major white roles in it at all… I showed it to all of them and they said no. We don’t know how to market a movie like this.” In 2012, are Hollywood producers seriously that racist? Or is their view of the rest of America so out-of-touch, so rooted in ugly stereotypes, that they actually believe all the rest of us are seriously that racist?

It Happened Again! - And This Time They're Suing!

Are Whites Really the Most Privileged Race in America?

At an unlawful #BLM protest in Wilkinsburg, Pittsburgh yesterday...

How woke Oberlin bullies prospered despite driving bakery to brink with racism lies:

Are All White People Racist?