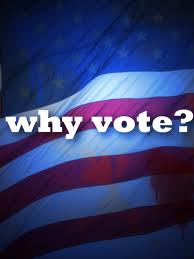 Vote? Why? What candidate in the quadrennial resurrection of the Mickey Mouse club wants to do anything that I want done?

I want to roll back the onrushing police state and return to constitutional government. The plunge into totalitarianism is a far worse danger than World War Two, in which the US was never in danger of being invaded, and in which the outcome was a foregone conclusion. Who do I vote for? No candidate (except Ron Paul: ERP) is against sovietization.

I want to end our stupid wars, now. Yesterday. Who do I vote for? There is no antiwar candidate (ERP). Obama sends the troops anywhere he can think of, and all the Republicans want to attack Iran.

I want to reduce the military by half and end the militarization of the country that is bankrupting us. Who do I vote for? (ERP)

I want to reduce the size of government, get rid of the departments of Education, Housing and Urban Development, and Commerce, toss the Bureau of Indian Affairs, and so on. What candidate wants to do these things? Republicans talk a good show, but which of them actually wants to cut?