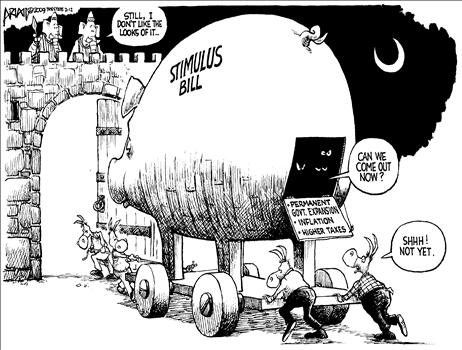 Lawmakers will return to Washington on Tuesday to begin an election-year work session with low expectations for any significant legislative action, while also receiving low approval ratings for themselves.

A new Washington Post-ABC News poll shows a new high — 84 percent of Americans — disapproving of the job Congress is doing, with almost two-thirds saying they “disapprove strongly.” Just 13 percent of Americans approve of how things are going after the 112th Congress’s first year of action, solidifying an unprecedented level of public disgust that has both sides worried about their positions less than 10 months before voters decide their fates.

4 Comments in Response to 84 percent of Americans disapprove of the job Congress is doing, poll finds

It wouldn't surprise me if the poll results were officially used to mean the House, while the people who were polled thought they were being asked about both the Senate and the House - Congress.

It's NOT the Congress, Dummies,  It's the SENATE that's Blocking Everything, Get Rid of the Dead Headed Senile Members, REID, McCain  and others that have been there Too Long !!!!

WOW! 84% of Amerkins disapprove of TREASON?

Why the Rush to Vaccinate Children?

Escobar: What To Expect From Taliban 2.0

Government Is Getting in the Way of Relief Efforts

Greyerz - The World Is Now Entering A Terrifying Endgame

Glenn Greenwald: How Many Lives Will Be Lost Because of 'Irrational' COVID Policies?