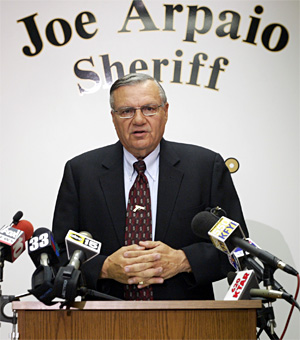 Racial profiling is a felony.

Yet the top two black officials in the nation, President Barack Obama and Attorney General Eric Holder, intend, in the words of the Justice Department, to "collaborate" with Sheriff Arpaio to remedy the abuses.

2 Comments in Response to Coddling Joe: How Do You Collaborate With a Felon?

You are entitled to know the truth!

In this website, you should know the truth when deliberately being blindsided.

This article was written by a writer in rage named Michael Lacey who together with Jim Larkin, were among those arrested in a "crime suppression operations". In the eyes of Sheriff Joe Arpaio’s deputies -- law enforcers mandated by law to do their job of cleaning up an illegal-alien-infested community of crimes -- those arrested were the real "felons" [or crime suspects] who violated the law, not Arpaio.

Lacey, the author of this article, was in the company of Larkin. Although their first and last names are similar, the angry writer did not say that Larkin is related to Larkin Rose, familiar to readers of this website as a "notorious" convicted tax felon.

You know how angry writer Lacey was when he PERSONALLY convicted the Sheriff in this article as a "felon"? He looked at Sheriff Arpaio as a "whitlow". A "whitlow" is synonymous to a "felon" [see his slanted headline] -- "a pus-filled infection on the skin at the side of a fingernail or toenail." [Encarta]. That’s how bitter this writer was.

It reminds readers of this website how bitter Larkin Rose was when he published his rage against the IRS after he served his sentence as a convicted tax felon.

Nothing personal here – just stating the facts that our reading public is entitled to know. That’s a public duty of journalists worth their salt.

Writer Lacey accused Arpaio of racial profiling of Mexicans that came to this country illegally. He claimed that the target of the crime suppression campaign were Mexican-Americans [who came to Arizona via the backdoor]. But the records of the Human Smuggling Unit show that this is a blatant lie. Out of the 45 people arrested in the March 21, 2008 operations referred to by Lacey, only one was Hispanic.

Out of 19 arrested during the Cave Creek operation, 18 were illegal Latinos or Latino suspects.

Lacey claimed that it is improper to ask a driver’s citizenship when caught violating traffic laws. He is so wrong.

For example, when a driver that speaks Latino with a broken English is caught violating our traffic laws, say driving without a driver’s license or driving with a suspiciously fake driver’s license when caught drunk while driving, would it not be proper to ask the errant driver if he/she is a U.S. citizen or a citizen of another country? This angry writer called this "racial profiling"!

Pictures allegedly showing Mexican profiling accompanied the article. One of those pictures was showing an arrested Mexican drunk who fell over the chair with his head on the floor upside down. The deputies described this as a "Mexican yoga", some kind of a joke if not a code name in the intelligence parlance. The angry writer Lacey considered this picture as proof of racial profiling of Mexicans in the country. How could that be so foolishly biased or self-serving, you tell me!

For what he was doing, Arpaio was sued by the Mexican American Legal Defense and Education Fund, and the American Civil Liberties Union [but who else?].

The Sheriff does not cover under this pressure. So far, only in this website that I know where he is published as a "felon" or a "whitlow".

The truth is, Arpaio is a bitter enemy of "whitlows" and their accomplices. The real "whitlows" are those who wanted to see the defeat of Government in the needed campaign to rid the country of rising crimes and the exploding number of illegal aliens that cross our borders everyday.

This, you must know.

Sorry, racial profiling isn't a crime in the U.S., and is used all the time.  Despite complaints by minority pressure groups, sometimes it's the best way the police can protect the public with their limited resources.  To make it a felony would be like chasing down and arresting the police in your pickup truck after they use racial profiling to stop you, fat chance in our police state. When it comes to Muslims, it isn't even racial profiling, or religious profiling, it's ideological profiling if done right, like they do in Israel, a model which the U.S. needs to adopt so that they stop strip-searching nuns.