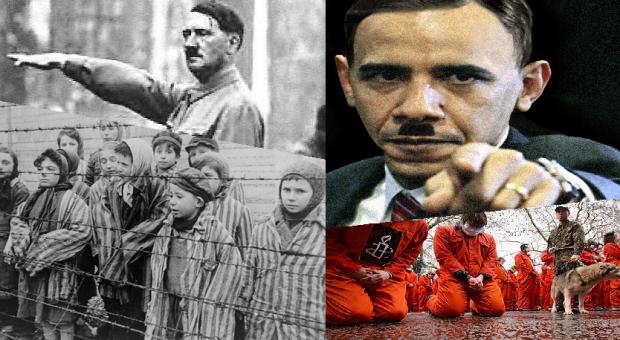 The Enemy Expatriation Act (H.R. 3166; S. 1698), an act that the U.S. Congress is now considering, that will allow the U.S. Government to take away citizenship of anybody that is considered a hostile enemy or supporting hostility towards the U.S. Government, is similar to the Nazi Factions Nuremberg laws where Adolf Hitler took away Germans citizenship based on race, bloodtypes, and those against the Hitler regime.

“If the Enemy Expatriation Act passes in its current form, the legislation will let the government strike away citizenship for anyone engaged in hostilities, or supporting hostilities, against the United States” in a news article by RussiaToday News.

The United States Government is actively passing laws mirroring the Nazi regime before they started killing anybody who was Jewish, Jehovah’s Witnesses, Politically against the Nazis or even Hitler himself, and attacked those that helped Jews and other political fugitives escape or hide in Nazi Germany.

Chuck Baldwin posted on Infowars that the “Congress is considering HR 3166 and S. 1698 also known as the Enemy Expatriation Act, sponsored by Joe Lieberman (I-CT) and Charles Dent (R-PA). This bill would give the US government the power to strip Americans of their citizenship without being convicted of being ‘hostile’ against the United States. In other words, you can be stripped of your nationality for ‘engaging in, or purposefully and materially supporting, hostilities against the United States.’ Legally, the term ‘hostilities’ means any conflict subject to the laws of war but considering the fact that the War on Terror is a little ambiguous and encompassing, any action could be labeled as supporting terrorism.”

The Nuremberg Laws were established in 1935 were antisemitic laws in Nazi Germany introduced at the annual Nuremberg Rally of the Nazi Party. Despite whether you are pro semitic or antisemitic, it is a very good idea to pay attention to the passing of the Enemy Expatriation Act, because Hitler first passed laws to get rid of certain Germans citizenship due to certain races and those against Hitler’s eugenics philosophies, right before he sent them to the Concentration camps aka death camps since the laws took away their citizenship.

So all the U.S. Pentagon, Northcom, the White House, the Capitol, or any agency in the U.S. government has to do is put out propaganda against certain races (bloodtypes), political groups, religions, and individual beliefs and any U.S. citizen that meets the attack propaganda quotas will instantly lose their citizenship, be secret arrested and detained without a court trial under the NDAA, and then sent to death camps to be exterminated.

We are State Citizens of the particular State in which we reside. Just ask Gene at http://www.theamericanrepublic.com/. He has done all the research. Nothing has changed. The States are a buffer between the people and the Federal Government.

Now, if you say that you are a U.S. citizen, maybe the U.S. Gov will accept you at face value: "Puh-lease, oh please let me retain my U.S. citizenship" - that I never had in the first place.

When they talk about you having U.S. citizenship, and they say your name, what they are really talking about is your Social Security (or some other) account, which is a person in their eyes. And it is true! Your SS account is held in the U.S. Government, and, being a person, is therefore, a U.S. citizen.

What? Are they going to deprive your SS account of citizenship? Oh No! No more benefits! And no more payments, either. Hurray!

Ask Gene for the laws so that you can declare (if necessary) where your citizenship lies. And stop making sworn or affirmed declarations of your U.S. citizenship, unless you know for a fact that you are a U.S. citizen.