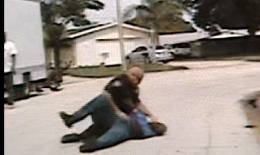 In Florida, Melbourne police Officer Derek Middendorf is accused of beating a 66-year-old man suffering from dementia.  A dash camera shows Middendorf delivering a kick to the stomach of Albert Flowers, then punching him after Flowers falls to the ground. The video also shows another officer running over and tasing Flowers in the face. The beating left Flowers in the hospital for a month. Yet, the police department only issued a written reprimand for one of the officers turning off the dash camera and audio equipment. A written reprimand. That’s it.

His nephew, Garrick Flowers, was heard screaming “He’s 66 years old, he had triple bypass, I think he’s killing him.”

While the officer received a written reprimand (the video was still able to be extracted from the hard drive but the audio was lost), Flowers was charged with battery on a law enforcement officer.

The officer who tased the man in the face received no punishment.

What is interesting is that, after reviewing the record that Middendorf tried to avoid, the prosecutors reduced the felony charge to a misdemeanor of resisting an officer without violence. However, if Flowers did not use violence to resist arrest, how were the officers justified in beating him so severely that he was in the hospital for a month?