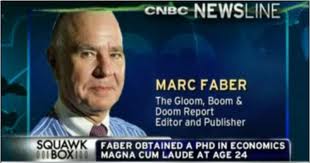 Well known economist, trend forecaster and Gloom, Boom and Doom Report publisherDr. Marc Faber joined some of the world’s leading investment minds at the Barron’s 2012 Roundtable to discuss what’s in store for 2012 and beyond with respect to the economy, inflation, political stability and a host of other issues.

As is generally the case, Dr. Faber doesn’t mince words and warns that, despite what happens in the near term, the end game is global conflict.

Marc Faber: On another optimistic note, World War III will occur in the next five years. That means the Middle East will blow up. New regimes there will be less Western-friendly. The West has also figured out it can’t contain China, which is rising rapidly and will have more military and naval power in Southeast Asia. The only way for the West to contain China is to control the oil tap in the Middle East.

Bill Gross (Founder, Pimco): How does your World War III hypothesis affect the financial markets? Is it positive for stocks?