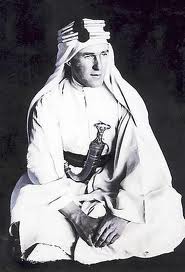 “All men dream: but not equally. Those who dream by night in the dusty recesses of their minds wake in the day to find that it was vanity: but the dreamers of the day are dangerous men, for they may act their dream with open eyes, to make it possible.”

You’ve taken the first step and read Lawrence’s Twenty Seven Articles.  Some are germane to a fight on American soil and some not so much.  We are entering a phase in world affairs where the economic troubles and collapses that are occurring around the globe will come home to roost in America.  Like most governments, the US central authorities in DC will do everything in their power to retain the power and control they now practice over their tax jurisdiction. Like the other USSR in 1989, a fracture is in the future and one state declaring secession will start a stampede the likes of which this country has not seen for nearly a century and a half.  The 320 million subjects are critical components in the tax-eater system to continue feeding the Federal beast.  These cattle will not be permitted to go gently into the night.

Lawrence discovered that successful insurgencies must retain the initiative and establish solid support among the mass base for all actions.  Whether we examine his successes against the Turks, the Irish divorce from the United Kingdom in 1916-1922 or the Basque success against the Spanish government to carve out their semi-autonomous province in Northeastern Spain, the initiative must be seized and retained.

This initiative can be maintained on a shoestring.  The force calculus for insurgencies is a meager ratio compared to the forces Counterinsurgency (COIN) and conventional forces must maintain to defeat incipient and long term guerrilla forces.

The IRA in both its pre- and post-WWII configurations fielded less than a thousand active fighters at peak strength against tens of thousands of deployed British and Northern Irish contingents.  German Colonel Paul Emil von  Lettow-Vorbeck fought more than a half million deployed British and Allied forces to a standstill in German East Africa for nearly four years during WWI with a force that rarely numbered more than ten thousand and at one point had 1200 effectives left.  No less than 127 General officers failed to vanquish him and at the conclusion of the war, he remained the only German General (he was promoted in abstentia in 1917) to be undefeated on Earth in 1918.  He sought to be self-sufficient and managed to manhandle naval guns off the ill-fated Konigsberg in the Rufiji all the way up to the slopes of Mount Kilimanjaro.

This illustrates that much like the irregular actions in both the First (18th century) and Second (19th century) American Revolutions, a tremendously small number of active fighters and triggermen can cause a disproportionate headache to large formations of conventional armed forces arrayed against them.  U.S. Grant had to take huge chunks of his fighting forces and devote them to protection of his lines of communication during his siege and investment of Vicksburg.  I would suggest that Napoleon was not necessarily wholly defeated by Wellington at Waterloo in 1815 so much as emasculated by French (southern) and Spanish guerrillas in his lines of communication after his atrocities and overreach enraged the local populations of these areas.  Before, 1850, France was not the monolithic nation state we are accustomed to today.  There were areas of it, like Germany, that did not even share dialects or language.

Lawrence paid attention to these details and more.  He studied the culture and the history deeply.  He was a brilliant and eccentric scholar whose steeping in Medievalism may have given him an edge in understanding the dynamics of the war he was waging with the indigenous forces against the Turks (and at times, against British post-war interests).  He delegated authority to tribal and clan leaders in ways that increased his combat and mission effectiveness.  He deferred to local authority to develop strongholds and effective placeholders when his mobile forces pursued other targets.

If you carefully examine his Articles and replace the use of “Ashraf and Bedu” with Appalachian, Inland Northwestern or Basque, the tenets become universal assignations for the leveraging of cultural intelligence for fighting effectiveness and combat power. I hope to develop a future compendium that examines every article in detail but brevity dictates that I entertain just a few examples.