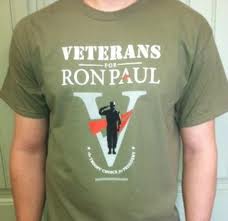 "Congressman Paul, South Carolina has seven major military bases, but you want to make major cuts in defense spending, several hundred billion dollars in the coming years. What do you say to people in this state?" – Wall Street Journal's Gerald Seib. .... "I would say your question suggests you are very confused about my position. I want to cut money, overseas money. I don't want to cut defense spending. We would save a lot more money and have a stronger national defense. Watch out for the military-industrial complex!" – Ron Paul ... YouTube, South Carolina debate, January 16, 2012

Dominant Social Theme: The US can't cut military spending because it will leave the country vulnerable to its enemies.

Free-Market Analysis: A little later perhaps than Ron Paul supporters would have liked, the eminence of conservative libertarianism has in many ways hit his stride. This video clip (see below) shows how Ron Paul is now capable of cutting moderators, and generally debate opponents, to pieces when they make a verbal slip. We can surely recall other inspiring Ron Paul moments but this, in our humble opinion, is the best we've seen.

In this video Ron Paul makes a firm distinction between defense spending and military spending. It's overdue, in our view, because Ron Paul has been continually criticized by neocons on this issue. He's loony, they complain. He would leave America defenseless.

Not at all. The difference between military spending and defense spending is a critical one. If the general public ever begins to make the proper connections, this distinction could cause a major change in the way US voters visualize how Washington DC "protects" them.

Military expenditures, Ron Paul explains, include those that fund the US's 900-plus bases around the world, the insane warring of the Anglosphere power elite and the expense of training and shipping soldiers anywhere in the world at a moment's notice.

1 Comments in Response to Military Versus Defense: Ron Paul Smacks Down WSJ's Seib

Just to point out the connection between Paul's statements here and Smedley Butler's "War is a Racket" speech.

Butler's 8-minute speech is re-enacted by Graham Frye.  At the end of the video, text appears stating that Butler declined in 1931 an offer to participate in a coup de tat led by military industrialists.  Shades of Eisenhower's military industrial complex warning.  Ol' Ike wasn't predicting the future - he was reciting history - actual history - actual American history!

I find the audience's supportive cheers for Paul's remarks encouraging.

Biden's Mad Mandate Is Ripping The Country To Shreds