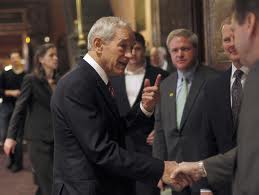 LAKE JACKSON, Texas – 2012 Republican Presidential candidate Ron Paul will pause from his active South Carolina campaign schedule to return to Washington for a vote denying President Obama’s request for a debt-ceiling increase.  The 12-term Congressman from Texas will travel to the nation’s capital tomorrow, Wednesday, and return early Thursday morning for the final three days of campaigning.

On January 12th, Obama announced his intention to exercise early an option to increase the debt-limit, and to do so in the amount of $1.2 trillion.  His option to do so was created under a 2011 budget agreement that created a near-automatic debt-increase mechanism, the use of a disastrous unconstitutional “Super Committee,” and other means of helping Congress shirk their core mission of managing the federal government’s purse-strings.

Tomorrow, House Republicans, Blue Dog Democrats, and other budget hawks have an opportunity to voice their displeasure at the spendthrift habits of the administration and those of their peers in a resolution refusing to grant Obama the right to exercise his option.  The vote, then, separates the true budget hawks from the tax-hikers and the borrowers, and helps frame the debate by forcing the Democrat-controlled Senate to support Obama – or compelling Obama to step way out in front and demand a credit card increase of $1.2 trillion in taxpayer money at a time when the national debt surpasses national GDP.