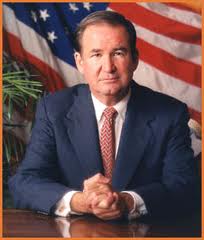 The Daily Bell is pleased to publish this interview with Patrick Buchanan.

Introduction: Patrick Buchanan has been a senior advisor to three Presidents, a two-time candidate for the Republican presidential nomination, and was the presidential nominee of the Reform Party in 2000. From 1966 through 1974, Patrick Buchanan was an assistant to Richard Nixon, and from 1985 to 1987, White House Director of Communications for Ronald Reagan. In 1992, Mr. Buchanan challenged George Bush for the Republican nomination and almost upset the President in the New Hampshire primary. In 1996, he won the New Hampshire primary and finished second to Sen. Bob Dole with three million Republican votes. Patrick Buchanan has written ten books, including six straight New York Times bestsellers: A Republic, Not an Empire, The Death of the West, Where the Right Went Wrong, State of Emergency, Day of Reckoning and Churchill, and Hitler and The Unnecessary War. His most recent book is Suicide of a Superpower: Will America Survive to 2025?

Daily Bell: Everyone knows who you are but let's pretend they don't. Give us some background on yourself and how you have come to your current success. Give us a sense of your intellectual development.

Pat Buchanan: I went to journalism school right after college and went out to St. Louis where I became an editorial writer for three years. Then I joined up with Richard Nixon in 1965 and was with him both through the out years until 1969 and the five years of his presidency up to August 1974.

Then I became a syndicated columnist, which I had always intended to be, and ten years later I went into Ronald Reagan's White House. I spent two years there and went with him to the summits in Geneva and Reykjavik.  Right after that I went back to writing a column until I challenged my old friend, George Bush, in the New Hampshire primary in 1992.  We did very well. We closed the gap from about 65 points to about 14 but we didn't win.

I ran in 1996 again and we won the New Hampshire primary and came in second for the nomination out of a field of ten. In 2000 I ran again, on the Reform Party ticket, which was unsuccessful.

Since then, I have been writing books, writing a regular column and appearing on The McLaughlin Group and MSNBC.  We have had success with the books; we've had seven New York Times bestsellers in the last seven books.  We've had some failures, too, and that is pretty much my background.

Pat Buchanan: I am more of a traditionalist conservative than I am a libertarian but I share with Ron Paul the view that America has become an over-extended empire.  After the Cold War we should have downsized the empire dramatically and returned to become a more normal nation in a more normal time.

I believe government has gotten too huge. Republicans have colluded with Democrats to make it so and I am pessimistic that we're ever going to be able to turn this around.

Daily Bell: Tell us about your latest book, Suicide of a Superpower.

Pat Buchanan: Well, the United States is certainly not a failed nation or a failed state but we are failing. We're unable to control our borders, we are unable to balance our budgets, we're unable to win or end our wars successfully and achieve our objectives, and we're unable to stop the hemorrhaging of American jobs and manufacturing abroad.