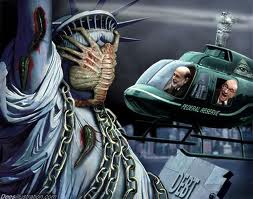 Inside the Fed in 2006: A Coming Crisis, and Banter ... As the housing bubble entered its waning hours in 2006, top Federal Reserve officials marveled at the desperate antics of home builders seeking to lure buyers. The officials laughed about the cars that builders were offering as signing bonuses, and about efforts to make empty homes look occupied. They joked about one builder who said that inventory was "rising through the roof." But the officials, meeting every six weeks to discuss the health of the nation's economy, gave little credence to the possibility that the faltering housing market would weigh on the broader economy, according to transcripts that the Fed released Thursday. Instead they continued to tell one another throughout 2006 that the greatest danger was inflation — the possibility that the economy would grow too fast. – New York Times

Dominant Social Theme: The Fed gets it right ... eventually.

Free-Market Analysis: Wow, what an article. At a time when many in the alternative media were shouting out loud about an impending financial crisis, many of the top men at the US Federal Reserve could only make jokes about desperate discounts being given out by house-builders that found themselves saddled with an ever-growing inventory they literally couldn't give away.

And who provides this information? Why, the Fed itself as part of an ongoing "openness" about its deliberations. This is, for the Fed, not a generous move but a desperate one. We've been writing about the trouble that central banking is in and the moves that will have to be made to try to counteract the growing perception that the Fed in particular is a sinecure of the vastly wealthy.

This is a direct result, in our view, of the Internet Reformation that has made it impossible for the power elite to pretend its dominant social themes are grounded in reality. The Fed didn't used to release a narrative of its deliberations. But over time, the pressure to explain this mysterious mercantilist facility has increased significantly. Tens of millions believe in the fear-based promotions of the elite, but millions do not anymore.

Central banking is a good example of just such a fear-based promotion. Invented in England some 500 years ago, the privilege of printing money for the state has been jealously guarded and incrementally expanded by a tiny pool of "central banking" until it has reached its current perfection.