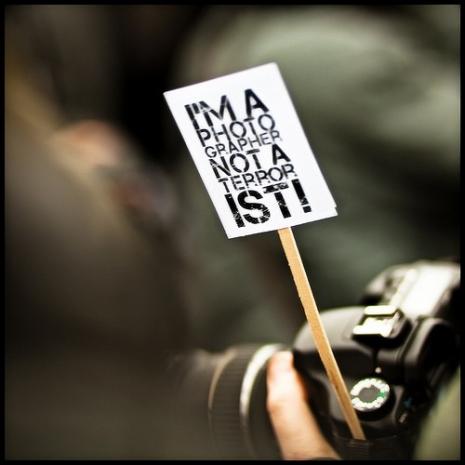 2011 could have been named the year of the cell phone camera. Individuals everywhere have used their cell phones or other electronic devices to record interactions with the police. Some States have taken offense to that and have allowed police officers to arrest people for documenting events in public.

In 2011, the First Circuit Court of Appeals out of Massachusetts ruled in favor of citizens first amendment rights to record in public. The Court has jurisdiction over MA, NH, RI, ME, and Puerto Rico.

"[I]s there a constitutionally protected right to videotape police carrying out their duties in public? Basic First Amendment principles, along with case law from this and other circuits, answer that question unambiguously in the affirmative."

"Glik filmed the defendant police officers in the Boston Common, the oldest city park in the United States and the apotheosis of a public forum. In such traditional public spaces, the rights of the state to limit the exercise of First Amendment activity are 'sharply circumscribed.'"

"[A] citizen's right to film government officials, including law enforcement officers, in the discharge of their duties in a public space is a basic, vital, and well-established liberty safeguarded by the First Amendment."

"Gathering information about government officials in a form that can readily be disseminated to others serves a cardinal First Amendment interest in protecting and promoting 'the free discussion of governmental affairs.'"

Unfortunately many states and police departments continue to arrest people for filming. These arrests constitute an abuse of power and are completely unlawful and unconstitutional and, unfortunately again, it will probably take more arrests and more lawsuits by individuals before all 50 states allow citizens their 1st amendment rights to free speech and free press by recording their interactions with police and other public officials.

We encourage you to look up the law in your city or state but we also encourage you to not be afraid and to film any misdeeds in public that you may be witnessing. A free press begins with you!

"Individuals have international duties which transcend the national obligations of obedience...therefore individual citizens have the duty to violate domestic laws to prevent crimes against peace and humanity from occurring"

6 Comments in Response to If You See Something, Film Something (You Have The Right To Film The Police)

Kim Dyer (#44164) I am having letters removed, words changed.  @ Pussycat:  Do you really think that because a Government created council says people who are antigovernment are mentally ill, and it is an epidemic?  LOL.  You have to be using passive-aggression.  Logically, it is insane to believe that to be true!  (And lazy).   The easy way is to feel superior and not do any work.  Especially if the status quo is serving you.

@ Pussycat, Kim Dyer (former #44164 if you wish to google my old comments when realized my identity being censored off while players at the Breakfast club were trashing me-yes gang-stalking to socially isolate me, as it appears to me they FAKE BEING PAUL SUPPORTERS AND DROPPED THE BALL!!!  ON PURPOSE PERHAPS?)...

Again, are some of you for real?  More than half of what I read looks fabricated and manipulative.  Do we really have so few true bloggers?  Or are you trying to pretend being naive (a Pussycat)?  I guess that Government funded Universities do not do anything corrupt, now didn't they (note Michael Crow at ASU ex-CIA).  And Government Councils do not state lies to discredit Anti-government protestors? So no people unhappy with Government are mentally ill?  Bwahahaha... that is soo cute. :)  I think you are faking for entertainment value.  I just don't see your comments possibly being authentic.  Not for someone who is constantly harping on here.  Didn't your claims for a Ph.D. afford you a job that doesn't keep you glued to the internet?  Oh wait...  You don't have one like you said?

You sure do love government, don't you.  Contrary to what JV states, which is almost always a blatant misrepresentation or manipulation because of his law degree, I see only two people commenting here that I've never seen on the forum... So you are being sarcastic?  Funny how important you find me, JV.  (J. Marc Victor?  come on... fess up).

The 14th amendment incorporated the 1st to apply to states as well so you're wrong.

Actually the commenter is incorrect. The 14th amendment incorporated the 1st to apply to the states also. Your first amendment rights apply throughout the United States.

Doesn't matter if it is a 1st amendment right. The 1st only applies to laws that the Feds make.

Nothing to do with the states.

It  does not give us any right or rights.

HOWEVER the right to film our employees in public is a God given inalienable right!!