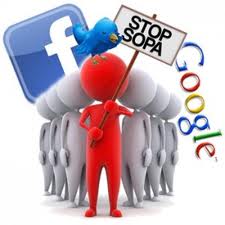 We’ve blacked out the headlines on our website homepage today as part of a global internet protest against two radical anti-piracy bills pending in Congress — legislation that threatens to usher in a chilling internet censorship regime here in the U.S. comparable in some ways to China’s “Great Firewall.”

SOPA and PIPA, the bills in question, are in tactical retreat as this story goes live, but it is almost certain their backers are already planning the next round, in a process that will continue in one form or another ad infinitum.

Under the current wording of the measures, the Attorney General would have the power to order ISPs to block access to foreign-based sites suspected of trafficking in pirated and counterfeit goods; order search engines to delist the sites from their indexes; ban advertising on suspected sites; and block payment services from processing transactions for accused sites. If the same standards were applied to U.S.-based sites, Wikipedia, Tumblr, WordPress, Blogger, Google and Wired could all find themselves blocked.

Such requests would need to be reviewed and approved by a judge. But accused sites would get little notice of a pending action in U.S. courts against them, and, once blacklisted, have little effective means of appeal.