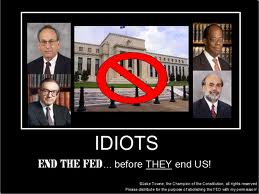 AUSTIN, Texas — Facing double-digit inflation in 1981, Congress created a commission to consider a role for gold in U.S. monetary policy. The 17-member panel rejected the idea of returning America to the gold standard — except for two dissenting members.

One was a little-known congressman from Texas named Ron Paul.

Today, Paul’s surprisingly strong race for the Republican presidential nomination is drawing new attention to a notion that long has been a cherished cause for a small group of conservatives but is considered a relic of history by mainstream economists and politicians.

Paul and his supporters would like to set a firm value for the U.S. dollar, much like when it was pegged to a specific amount of gold. They say prices would be stable and inflation controlled because the government couldn’t print more money than it had gold to back it up. This approach, Paul maintains, would address many of the economy’s problems.

2 Comments in Response to Ron Paul wins support urging end to the Fed, pushing the gold standard. But is that possible?

Is it possible? Oh, yes ... in his broken dream! Take it from the monetary experts of the street -- from the boulevard of broken dreams!

There was a real reason for setting the Federal Reserve Bank in place back in 1913. It is the same reason that still exists. The reason would be legitimate if the Fed followed through honestly.

In addition, Government is limited by the Constitution as to how much it can "dabble" in artificially maintaining price controls... price controls that would be necessary to keep citizens from being harmed in times of a gold and silver shortage.

The Federal Reserve doesn't arbitrarily create the money it creates. It has strict rules that it follows, including the rule that, in order to get the money out into the public, it must loan the money to the people.

Now, this would be okay, if the Fed followed through with the other part of the rule. That part is to "give" the repaid loan amounts back to the borrower, at the end of the term of the loan, after the loan has been completely repaid. Rather, the Fed has kept the loan, has not returned it to the people, has thereby unjustly retained the private property of the people - their labor in repaying the loans.

To make things right, all loans that have not been returned to the people who borrowed the money in the first place, should be returned to them along with interest, or to their estate, before we go back on the gold and silver standard.

In other words, where ever the funds have been transferred around the world, whatever properties and nations have been purchased with these funds, whatever loans have been made outside America, should all be returned to ownership of the American people - or their estates if they are deceased - since the banks only used the repaid loan money, which wasn't theirs to keep, since it was a creation of new funds that would never have happened if the people had not requested the loans in the first place.

The funds belong to the people. That was the idea originally. It was all about liquidity in America. It never was meant to become the enslaving of a nation to a bunch of bankers. The bankers have lied and cheated.