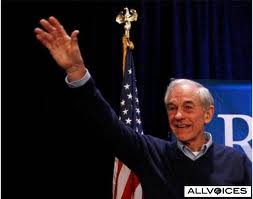 These are some good answers for voters who have questions about Ron Paul from a Christian perspective. Writes Voddie Baucham, Pastor at Grace Family Baptist Church:

Since posting a passing comment on my Facebook fan page about Ron Paul, I have been inundated with questions and concerns about my support of the Texas Congressman in the current Republican Primary race… The result was hundreds of comments; more than any other post I’ve ever submitted. Most of the comments were positive. However, several were extremely negative… As a result, I’ve decided to explain my position, and this seemed like the best place to do it.

I. Ron Paul is a Christian Conservative

While I am not looking for a “Pastor-in-Chief,” it is important to me that the man for whom I cast my vote be a Christian, if at all possible… I also want to know that the foundational ideology motivating a man’s decisions is biblical. I know it will not always mirror my own, but I trust God’s word, and appreciate those who look to it for aid in making decisions. To that end, I support Dr. Paul because he is not just a conservative, but a Christian Conservative.

Dr. Paul does not beat his Christian faith like a drum in his public/political life. Unfortunately, that is off-putting for the “Christian Right”. However, in a world full of ‘posturing’ in an effort to win over evangelicals, I find Paul’s public demeanor refreshing. And it is not as though he is a ‘closet Christian,’ either. “I have accepted Jesus Christ as my personal Savior, and I endeavor every day to follow Him in all I do and in every position I advocate” wrote Paul on his Web site… Having met and talked to Dr. Paul, I would say it is authenticity, and humility more than anything else. He wants “to avoid any appearance of exploiting [his faith] for political gain.”[6]

Not only is Ron Paul a Christian Conservative; he is also a Constitutional Conservative. He holds himself accountable to the Constitution of the United States, even when it means he has to vote against legislation that may be otherwise beneficial… I want a man whose decisions are predictable because of a long track record of constitutional conservatism. I may not always agree with a man like that, but I will always know why he did what he did, and I can live with that. Especially in several crucial areas facing our Republic, like money, war, States’ Rights, and foreign policy, for example.

I support Ron Paul because he has a constitutional view of money. He is the only candidate consistently to confront the Federal Reserve Bank (which is not federal, has no reserves, and is not a bank), and address the issue of fiat currency (a.k.a. unjust weights and measures; Lev 19:36; Prov 16:11), which debases the dollar, manipulates business cycles, creates inflation, and always benefits the rich at the expense of the poor and disenfranchised. And he talks about the issue in just those terms.

I support Ron Paul because he is a military veteran (yup… he refuses to beat that drum too, which is why you may not have known that little tidbit). And though I do not believe it is necessary for a man to have served in the military for him to serve as President, the fact that Congressman Paul knows and hates war lends credibility to his desire and commitment to ending the wars and bringing our troops home. Moreover, he has a constitutional understanding of war (only Congress can send us to war), and a Christian commitment to historic Just War Theory (rooted in the Sixth Commandment… HIS WORDS).[8] He, unlike other candidates, can be counted on not to commit to acts of war without congressional authority (i.e., unilaterally deciding to bomb a sovereign nation if they advance their weapons technology in a region several thousand miles away from the U.S., under the watchful eye of a nation with over 300 nukes who can stop them in a heartbeat… but I digress).

There is a reason Dr. Paul has received more support from members of the military than all other candidates…

5 Comments in Response to Baptist Pastor Explains “Why Ron Paul?”

@RickFowlkes   Only if he preaches this endorsement from the pulpit...

Why this early eulogy of the Pastor? Ron Paul is still alive ... still in the race. Can't the Pastor wait until he drops out? Won't be long.

Thank you Pastor for your bold position, be careful however or you will loose your 501C3 tax exempt status...