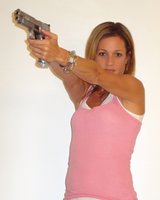 Over the past couple months, I’ve been trying to get a legal gun in the District. I always knew this would be a challenge, but I had no idea how time-consuming it would be to complete all 17 steps the city requires. I’m not even halfway done.

My quest started in October at the D.C. Gun Registry at the police department. I met with Officer Brown, who put piles of paper on the desk between us. “Here’s everything you need to know,” she said, pointing to a stack about a quarter-inch thick.

I asked where I could buy the gun. “You can go to any licensed dealer in another state - or on the Internet,” she said. “Then give this form to Charles Sykes downstairs, and he’ll go pick it up for you and transfer it.” I glanced through the registration packet and saw no reference to Mr. Sykes or transferring a gun. So I figured while I was there, I should track down this man, who seemed to play a key role.

By luck, Mr. Sykes was in the office, where he works about four hours a day, by appointment, as Washington’s only legal gun broker. While gun sales have been skyrocketing in the rest of the country, D.C. residents have been buying at a rate of about 250 a year, so Mr. Sykes isn’t getting rich. He charges $125 to pick up the gun and do the transfer.

I told Mr. Sykes that I’d recently asked D.C. Council Chairman Kwame R. Brown whether he supported the Second Amendment. “I don’t support having more guns in the District of Columbia,” Mr. Brown had replied, “I don’t think we need more guns in our streets.”

Selco: You Know the SHTF Has Started When People Begin To Lose Their Guns

With Deception and Misdirection, --

Your Gun Is None of the Government's Business

OPINION: It Is Time For Malls To Abandon 'No Firearms' Policies