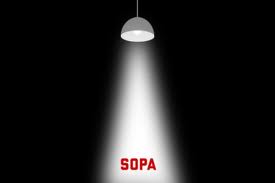 The secret behind SOPA, the so-called anti-piracy bill which is today the target of an unprecedented backlash with Wikileaks and other major websites ‘going dark’ to protest the legislation, has nothing to do with piracy or copyright theft – it’s about the formal effort to mimic Communist China’s system of Internet censorship.

But don’t take our word for it, listen to what Joe Lieberman, co-sponsor of PIPA, SOPA’s sister version in the Senate, said about the purpose of behind the US government’s efforts to control the Internet under the guise of cybersecurity.

Lieberman characterized fears that the US government would use such powers to censor political content as “total misinformation,” yet goes on to admit that the purpose behind the agenda is to mimic China’s ability to “disconnect parts of its Internet in case of war,” adding, “we need that here too”.

Of course, Communist China’s “war” is not against foreign terrorists or hackers, it’s targeted against people who dare to use the Internet to express dissent against government atrocities or corruption. China’s system of Internet policing is about crushing freedom of speech and has nothing to do with legitimate security concerns as Lieberman well knows.

Having largely failed in his bid to use fears over cyberwarfare, bearing in mind it was the United States and Israel who launched the Stuxnet attack, to achieve the ultimate goal of Internet control, Lieberman has returned with the same agenda only under a different guise – the Protect Intellectual Property Act – of which he is the co-sponsor.