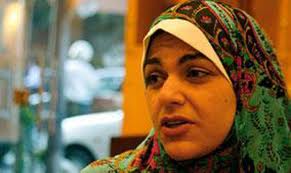 CAIRO (AP) - Assailants attacked a prominent Egyptian activist as she left work at Cairo's Nileside state television headquarters late on Wednesday, in the latest incident of violence against the protest movement that toppled Hosni Mubarak's regime to be captured on video.

A clip posted on social networks showed a small crowd punching and kicking Nawara Negm, and hurling abuse at her. Her assailants could be heard saying she wanted to drive a wedge between the ruling military and the people. Others called her an "agent," presumably of a foreign power.

Negm told a TV interviewer late on Wednesday night that the beating left her with a swollen eye, but that she was otherwise unhurt. She said the beating took place while scores of policemen and army soldiers assigned to the protection of the TV building stood by and watched.

"I am not the type that runs away. I stood my ground," she told the interviewer on the privately owned ONTV station.

Negm is the daughter of Ahmed Fouad Negm, Egypt's best known satirical poet and a longtime critic of Mubarak. She was a key figure in the 18-day uprising that forced Mubarak to step down last February. Also a newspaper columnist and blogger, she has been sharply critical of the generals who took over from the ousted president.

Negm was questioned by prosecutors this week over her alleged role in deadly clashes last month between troops and protesters in Cairo.