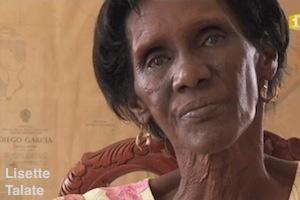 Lisette Talate died the other day. I remember a wiry, fiercely intelligent woman who masked her grief with a determination that was a presence. She was the embodiment of people’s resistance to the war on democracy. I first glimpsed her in a 1950s Colonial Office film about the Chagos islanders, a tiny creole nation living midway between Africa and Asia in the Indian Ocean. The camera panned across thriving villages, a church, a school, a hospital, set in a phenomenon of natural beauty and peace. Lisette remembers the producer saying to her and her teenage friends, "Keep smiling girls!"

Sitting in her kitchen in Mauritius many years later, she said, "I didn’t have to be told to smile. I was a happy child, because my roots were deep in the islands, my paradise. My great-grandmother was born there; I made six children there. That’s why they couldn’t legally throw us out of our own homes; they had to terrify us into leaving or force us out. At first, they tried to starve us. The food ships stopped arriving [then] they spread rumors we would be bombed, then they turned on our dogs."

In the early 1960s, the Labor government of Harold Wilson secretly agreed to a demand from Washington that the Chagos archipelago, a British colony, be "swept" and "sanitized" of its 2,500 inhabitants so that a military base could be built on the principal island, Diego Garcia.  "They knew we were inseparable from our pets," said Lisette, "When the American soldiers arrived to build the base, they backed their big trucks against the brick shed where we prepared the coconuts; hundreds of our dogs had been rounded up and imprisoned there.  Then they gassed them through tubes from the trucks’ exhausts. You could hear them crying."