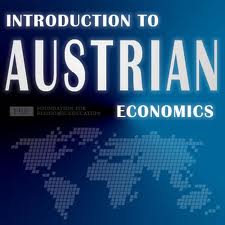 When a presidential candidate declares, as Ron Paul has, “We’re all Austrians now,” it’s inevitable that his critics would try to discredit him – whether they understand what he’s talking about or not. That’s what Matthew Yglesias does in his Slate piece “What Is ‘Austrian Economics’?”

I recommend the piece because it’s highly informative – about what Austrian economics is not.

We’re off to a rocky start with this: “The Austrian school originally referred to a set of classical liberal thinkers with diverse interests who came out of the Austro-Hungarian Empire.”

The earliest Austrian economists did not make their mark by advocating free markets and other classical-liberal ideas. They did so by proffering a revolutionary positive (not normative) theoretical approach to understanding how markets work, focusing on value, price, and capital, theory. What Wikipedia says is consistent with my understanding of the matter: “When Carl Menger, Eugen von Böhm-Bawerk, and [Friedrich von] Wieser began their careers in science, they were not focused on economic policy issues, much less in the rejection of intervention promoted by classical liberalism. Their common vocation was to develop an economic theory on a firm basis.”

Yglesias thus conflates Austrian economic theory with libertarian political theory. In fairness, he is not alone in committing this error. Many libertarians do the same, which is unfortunate. Austrian economic theory describes how purposive action by fallible human beings unintentionally generates a grand, complex, and orderly market process. An additional ethical step is required to pronounce the market process good. Economic theory per se cannot recommend but only explain markets. This is what Ludwig von Mises meant when he insisted that Austrian economics is value-free. Anyone of any persuasion ought to be able to acknowledge that economic logic indicates that imposing a price ceiling on milk will, other things equal, create a shortage of milk. But that in itself is not an argument against the policy. Mises assumed the policymaker would have thought that result bad, but the economist qua economist cannot declare it such. As Israel Kirzner likes to say, the economist’s job in the policy realm is merely to point out that you cannot catch a northbound train from the southbound platform.