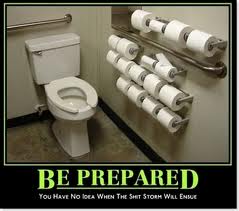 The warning signs are all around us.  All we have to do is open up our eyes and look at them.  Almost every single day there are more prominent voices in the financial world telling us that a massive economic crisis is coming and that we need to prepare for the worst.  On Wednesday, it was the World Bank itself that issued a very chilling warning.  In an absolutely startling report, the World Bank revised GDP growth estimates for 2012 downward very sharply, warned that Europe could be on the verge of a devastating financial crisis, and declared that the rest of the world better "prepare for the worst."  You would expect to hear this kind of thing on The Economic Collapse Blog, but this is not the kind of language that you would normally expect to hear from the stuffed suits at the World Bank.  Obviously things have gotten bad enough that nobody is even really trying to deny it anymore.  Andrew Burns, the lead author of the report, said that if the sovereign debt crisis gets even worse we could be looking at an economic crisis that could be even worse than the last one: "An escalation of the crisis would spare no-one. Developed- and developing-country growth rates could fall by as much or more than in 2008/09."  Burns also stated that the "importance of contingency planning cannot be stressed enough."  In other words, Burns is saying that it is time to prepare for the worst.  So are you ready?

Great photo. Obviously a terrorista who is expecting SHTF quite literally.

Hey, watch out.  Having  too many rolls of toilet paper and more than 7 days worth of food is a sure sign of terrorism.  You may end up in Club Gitmo just for making this post and suggesting that people engage in such terroristic behavior.