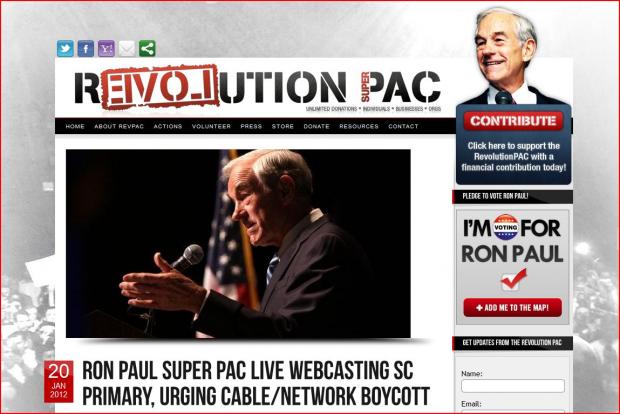 Revolution PAC panel and correspondents to break down contest and road ahead.
FOR IMMEDIATE RELEASE Northbrook, IL (PRWEB) January 20, 2012 - Revolution PAC, backer of U.S. Rep. Ron Paul’s bid for the Republican nomination, will host a live webcast on Saturday following the South Carolina Primary election. In conjunction with the event, the super committee is calling for a nationwide boycott of cable/network outlets, which have exhibited bias against Rep. Paul in their reporting.

“Quite simply, Ron Paul’s supporters are losing their patience and are creating their own media opportunities,” says Franchi. “Revolution PAC is pleased to be able to offer this forum, and we anticipate a lively event on Saturday.”

Election analysis will be provided as the polls close tomorrow by Revolution PAC’s South Carolina correspondents and an in-studio grassroots liberty panel. The public is invited to participate in the webcast from 6:00 p.m. to 11:00 p.m. CST Saturday, January 21 by visiting http://www.RevolutionPAC.com.

Rep. Paul received the coveted endorsement of South Carolina State Sen. Tom Davis Sunday, Davis calling Paul “a Tea Party of one against a towering wave of red ink.” At a Myrtle Beach press conference, Davis added, “There’s only one person speaking to what I believe is the core problem of our country today. The biggest threat to our liberty comes from debt.”

Reinforcing what is shaping up as a two-man race, Rep. Paul and Mitt Romney are the only Republican candidates who have successfully secured positions on the primary ballots of every state, reported South Carolina’s The State newspaper last week. A CNN/ORC International Poll released Monday also revealed that Paul and Romney are the only Republican contenders tied with Barack Obama in a likely general election matchup.

I'll be impressed when they call for the boycott of FAUX Noise.

Come help make signs to hold and put up at Freedom From Mask Mandates in Manchester, NH

September 15 No Mask Day {Sep} Is It Good Site or Not?

Small Kingman, AZ Activist Group Is Successfully Pushing Back Against the Unconstitutional...

#ExposeBillGates scrubbed from the internet??

In 3 00 min Ben Swann Will Tell You How This Pandemic Is An OPPORTUNITY for Reform!

Swept up in the federal response to Portland protests...