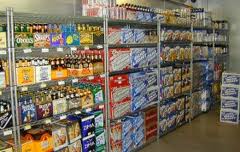 Several future scenarios include or produce famine on a very large scale. The goal of a famine feeding strategy is to get people from the beginning of the famine to the end alive and not permanently damaged. In extreme circumstances this may call for unusual measures…

Preparing for famine. We can be reasonably confident that any future crisis will include food scarcity. From EMP to pandemic, from war to drought, food is a critical resource. (The projected death rate from an EMP, including death from a variety of causes including famine, is 9 out of 10 Americans!) The sooner we can educate people about the dangers ahead the sooner every family can begin to prepare. Every little bit will help. And the sooner we start the better.
People need to know the facts in a non-inflammatory way and in a way they can relate to, “painting them a picture” so to speak of how it could affect them and their family. They need to know they cannot expect a government rescue, they need to take personal responsibility for their preparedness. And they need hope – to believe that their efforts can make a difference in the outcome.
Americans have been manipulated, lied to, cheated, and stampeded from issue to issue by unscrupulous people in government, education, the media, and even the church. We need a well thought-out strategy so that we don’t sound like crazies predicting the end of the world or selling something. That’s not going to happen without a lot of deliberation and work.

1 Comments in Response to Alternative Foods in Famines

Or an easier solution would be the one proposed in the movie "The Road" - each other!  Heavens knows that those who have the misfortune of eating a right winger will die in the most painful and horrible  of ways but it's a chance we'd all have to take, I guess.

The Pros and Cons of Emergency Food Buckets