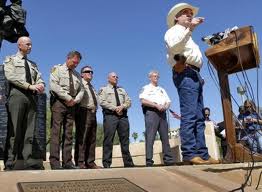 Arizona's state legislature will open its own investigation into the Obama administration's disgraced gun-running program, known as "Fast and Furious," the speaker of the state House said Friday.

Speaker Andy Tobin created the committee, and charged it with looking at whether the program broke any state laws — raising the possibility of state penalties against those responsible for the operation.

It's a turnaround from the rest of the immigration issue, where the federal government has sued to block the state's own set of laws.

A law requiring businesses to check new workers' legal status was upheld by the Supreme Court last year, and the court has agreed to hear the case of Arizona's crackdown law that makes being an illegal immigrant a state crime and gives state and local police the power to enforce that law.

Fast and Furious was a straw-purchase program run by the Bureau of Alcohol, Tobacco, Firearms and Explosives. The goal was to try to trace guns sold in Arizona shops and then trafficked across the Mexican border, where they landed in the hands of drug cartels.

4 Comments in Response to Arizona strikes back: State investigates feds over gun-running

It's encouraging that our state government is more and more standing up to our federal government's abuses and criminal behavior.  If they're found guilty they need to do some real jail time and pay substantial fines. If we do enough of this we could avoid an American spring and all this NDAA crap.

Hey Tittiger - do you need to be so insulting with your big, loud red font?

One would think that in the entire AZ legislature that there would be at least one person that understood our form of government and invoke the rule of 98 to nullify unconstitutional laws.

It seems like the primary skill in this body is getting elected.  I am 100% certain that I could do a better job of guarding liberty than the current sycophants. But that never gets one elected does it?

Please, please, please, don't tell me Joe Arpaio is doing this in order to take the heat off the accusations  of his human rights violations.