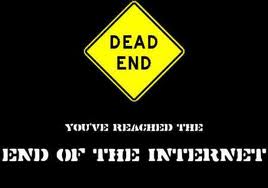 Today was the day the internet went semi-dark.

Sites like Reddit, Wikipedia and thousands of others went dark in protest of the latest attempt at a violent terrorist attack on the internet, the so-called Stop Online Piracy Act (SOPA). Here at The Dollar Vigilante (TDV) we didn't go dark. We figure we'd be one of the first sites taken offline if/when SOPA is enacted so why give them what they want.

And what is it they want? They want to heavily regulate the internet and have the power to shut down any website. It's a cyberwar going on, says Joseph Lieberman in this interview. Well, yes, there is a war, but it was one started by the US Government. Surprise, surprise.

But was there a cyberwar before valiant Joseph Lierberman rode up on the scene? Has anyone been shot? Did your laptop explode in your hands? What's the worst thing that's ever happened to you on the internet? Spam?

How many wars go on in the minds of these people? A harmless plant, marijuana, somehow in their world evolves into a brutal War on Drugs that kills hundreds of thousands per year. An emotion… terror… somehow turns into a War on Terror that has killed over a million people and resulted in a massive loss of freedom and liberty in the US, including the cancellation of the Bill of Rights. And now, the internet… the thing you are on right now… peacefully, without problem, they consider to be an ongoing Cyberwar and try to proclaim the GOVERNMENT needs to protect us from it!