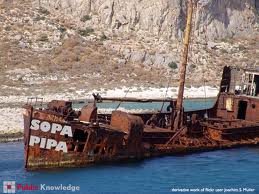 "When we feel the heat, we see the light." ~ Senator Everett Dirksen

On Wednesday, January 18, the forces of liberty gained a major political victory over the entrenched meddlers in Congress. The owners of a handful of popular Internet sites joined together to protest SOPA/PIPA. They blacked out their sites and provided information on the threat to Internet liberty this bill posed.

Before the day was over, a majority of our elected representatives were doing a superb imitation of the captain of the grounded Italian cruise ship. They abandoned ship as fast as he did, and for the same reason. (Note: the reason was not that they had slipped and fallen into the lifeboat, then to be carried to safety against their will.)

A few weeks before, the Senate version of the House's SOPA (Stop Online Piracy ACT) bill, called PIPA, was unanimously passed by the Senate Judiciary Committee. PIPA stands for the Protect IP [Intellectual Property] Act. It was non-controversial at the time. It was on a well-greased skid to passage.

Let us not be naive. SOPA/PIPA is a payback for to the entertainment industry's generous support of PACs and campaign donations. For a list of who got how much, click here.

Senator Ron Wyden (D-Oregon) did object. He was not on the committee. He vowed to filibuster PIPA. So, Harry Reid announced that he would push it through. He vowed to introduce a 60-vote cloture motion to limit debate. Senator Reid said he would schedule the debate on January 24. There is a Website called Unanimous Consent. It tracks the fast-track bills. Here was its assessment on December 23.

1 Comments in Response to Victory on SOPA: Lessons Learned

The only lesson to be learned from SOPA is how they're gonna snick into some obscure bill when the dust settles.  And nobody will see it coming, passing or going till they're hauled to jail for using one of the masters' copyrighted words or punctuation marks.