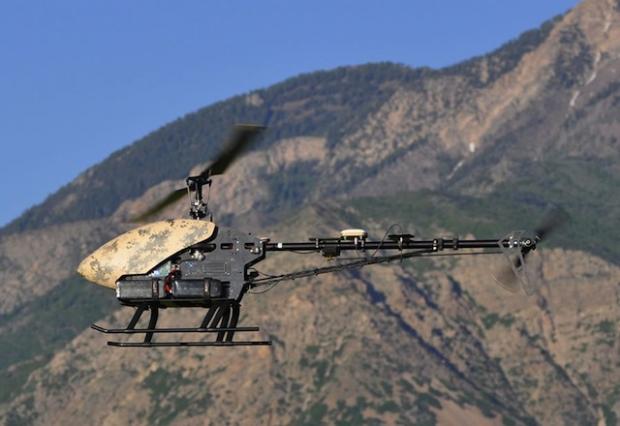 The Navy is hoping to one day run a huge chunk of its fleet on biofuels. So the Navy’s advanced researchers — and their partners at the U.S. Department of Agriculture — are turning to a tiny robotic helicopter to help them figure out which crop they might be able to convert into their fuel of the future.

The experiment is taking place over 35,000 acres of Maui soil, on the fields of Hawaiian Commercial & Sugar, the state’s largest commercial sugar plantation. That’s the site of a $10 million, five-year gamble to test which of plantation’s crops might work as grow-your-jetfuel. The drone helicopter will track every temperature fluctuation and sprouting bud emerging into the Hawaiian sun.

But it’s hardly certain that any of the plants will actually wind up in the engines of destroyers or F/A-18s. Yes, the Navy is betting big on alt-energy — the goal is to cut its fossil fuel usage in half by 2020. And yes, the Navy just made its biggest-ever purchase of biofuels: 450,000 gallons for $12 million, enough to power an entire aircraft carrier strike group during a demonstration voyage this summer. But half of that order went to a division of Tyson Foods, which coverts fats and waste greases into biofuels. The other half went to Solazyme, which uses algae as a means of fermenting everything from plant matter to municipal waste into fuel. In other words, neither of them is really grow-your-own.

Nevertheless, the Office of Naval Research and the Agriculture Department are wondering whether Maui’s mix of plants, tropical sun, and nutrient-rich soil can produce a bumper crop of clean, renewable energy. Enter the Leptron corporation’s tiny drone helicopter, the Avenger. It’s about to be the Navy’s robotic horticulturist in Hawaii.

Mercedes invents a car that reads the driver's mind

The Road to Self-Reproducing Machines