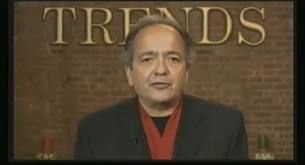 Introduction: Forecasting trends since 1980, Mr. Gerald Celente, Founder/Director of the Trends Research Institute, is author of the highly acclaimed and best selling books, Trend Tracking and Trends 2000 (Warner Books) and publisher of the Trends Journal. Using his unique perspectives on current events forming future trends, Gerald Celente developed the Globalnomic® methodology which is used to identify, track, forecast and manage trends. His on-time trend forecasts, vibrant style, articulate delivery and vivid public presence makes him a favorite of major media. The Trends Research Institute has earned the reputation as “today’s must trusted name in trends” for accurate and timely predictions. On the geopolitical and economic fronts, Celente and The Trends Research Institute are credited with predicting the collapse of the Soviet Union, the last two economic recessions, the dot-com meltdown, the 1997 Asian currency crisis, the 1987 world stock market crash, increased terrorism against America, "Crusades 2000," the quagmire in Iraq … before war began and much more.

Daily Bell: Give us some background on yourself and how you have come to your current success.

Gerald Celente: My background is such that after graduate school and I got my Masters in Public Administration, I started running political campaigns in Westchester County in New York, which is a very affluent area. I was very successful at it so they sent me up to Albany, where I became the assistant to the secretary of the New York State Senate; Albany, of course, is the capital of New York State. It was there that I really started learning about the political game. It was probably the worst job I ever had because it was watching grown men suck up and bow down all day to get to the top.

So from there I taught at St. John's University and it was the nation's first course in American politics and campaign technology – how to run a political campaign. From there I moved to Chicago and was a government affairs specialist for the chemical industry. I used to put together, when they were just being formed, political action committees. So I would hire the people, do the work to get legislation overturned or get different legislation passed. So I have been around the political scene long enough to have a good feel of it.

Then in the late 1970s it was that lightbulb moment, and Jimmy Carter had just come back from Iran. The Iranian conflict was heating up and, ironically, it is just heating up as we are speaking now. Not much has changed; only the names and players. So Carter comes back from spending New Year's Eve with the Shah and his wife and announces that the Shah is the "Island of Stability" in the Middle East. At that moment I became a political atheist. I'd been following this thing for years. I knew how the United States government and the MI5 in the UK overthrew the democratically elected government of Mossaddegh in Iran, in 1953, because he had the NERVE to nationalize the oil fields, take it away from Anglo-Iranian oil – better known today as BP and Standard Oil, better known today as Exxon. So I knew also what a brutal dictator the Shah was and how he had imprisoned and slaughtered and tortured tens of thousands of people. So when a revolution broke out, I knew it was real and I knew that Carter was lying to the American people and the world.

So then when I got over all of that I wondered what would be the implications of all of this and I realized that current events form future trends, and that is the foundation of my work. You look at things for the way they are, not the way you want them to be. It's not what you like, dislike, hope for, wish for, believe in – that has nothing to do with it. So what will be the implications? And the implications were that gold and oil prices would go up as this situation worsened. So then, not knowing what I was doing, I started playing the gold and oil futures market. And I made enough money to quit my job (laughing) and I began the Trends Research Institute, with the understanding that if you look at things as they occur on a global basis and try to assess their implications, you can get a pretty good idea where things are going to go.